The Society of Free Quakers

When English Quaker William Penn (1644-1718) established his colony, he called it a “holy experiment” because he believed religious liberty was an instrument of Christian salvation that would enable men to live in harmony. Penn did not believe in social equality. Mutual respect, love and brotherly kindness were the underpinnings of his concept of social order. While his vision was fundamentally Christian, he saw no need to exclude non-Christians, although they could not hold office, and this expansive view contributed to social pluralism in Pennsylvania that made it unique in the American colonies.

Quakers are Christian non-conformists. They reject creeds, sacraments and the priesthood – there are no ministers in the traditional sense. Rather, they believe the “Inward Light” of Christ is in each person; this inner light is an emanation of divine goodness and virtue that brings the means of salvation within reach of everyone who awakens to its existence. Because the inner light is within all, there is a spirit of tolerance and fraternity with others. Consequently, Quakers address one another as Friend and the organization is known as the Society of Friends. They gather for worship and to conduct business in Meeting Houses. 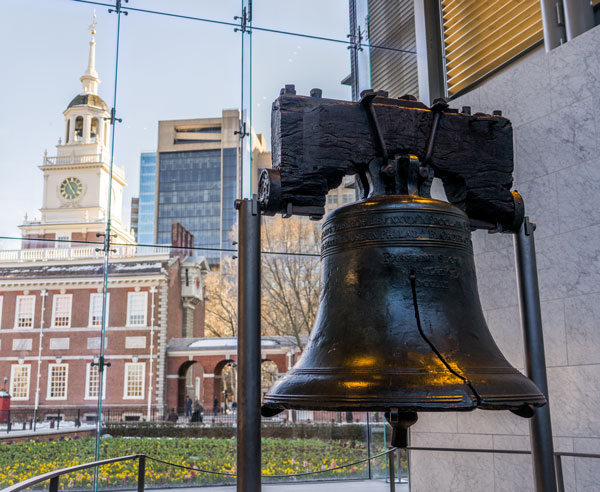 Penn’s religious beliefs were reflected in the governmental structure and social organization of the colony. The year 1751 marked the 50th anniversary of the Charter of Privileges, which granted liberty to those settling in Pennsylvania and to celebrate the occasion the Assembly ordered a great bell for the State House. Today, both the bell and the building are revered symbols of our democracy – the Liberty Bell and Independence Hall. They are part of Independence National Historical Park, as is a small brick Meeting House built for the Society of Free Quakers in 1783. The circumstances that prompted its construction tell a story of a crisis of conscience for some Quaker men and women during the years of the Revolutionary War.

For Quakers in mid-18th century Pennsylvania, religion was a matter of right living and “clearness” concerning Quaker testimonies, including the Peace Testimony, which was central to William Penn’s concept of a new social order grounded in the Golden Rule and the doctrine of the Inner Light. Increased demands from the King to support English wars and calls for a militia to defend the western frontier led to Quaker withdrawal from the Pennsylvania Assembly. A conservative, rule oriented, inward looking mindset accompanied the withdrawal from politics and, for a time, Meetings were lenient in enforcing the Rule of Discipline on the matter of the Peace Testimony. But with the coming of the Revolution, the issue became more important and its integrity was at stake. In 1775, a statement appeared in the Pennsylvania Gazette explaining the situation:

“Having considered with real sorrow the unhappy contest between the legislature of Great Britain and the people of these Colonies, and the animosities consequent thereon, we have, by repeated public advices and private admonitions used our endeavors to dissuade the members of our religious society from joining with public resolutions promoted and entered into by some of the people, which as we apprehended, so we now find have increased contention, and produced great discord and confusion.”

Quakers tried to maintain neutrality and offenses punishable by disownment were many: joining an association (a militia-like group), paying war taxes, placing guns for defense on a vessel, paying fines in lieu of military service, swearing an oath of allegiance, or in any way aiding the war on either side. Disowned Friends generally accepted the Meeting’s action, and a few repented and were reinstated. But some who were sympathetic to the struggle for independence and acted accordingly were also sincerely attached to the general principles of Quakerism. For these Quakers, support for the war meant loss of their religious community and this was untenable.

Samuel Wetherill was among those disowned in 1779 for disunity because he had taken a “Test of Allegiance” and “deviated from our ancient Testimony and peaceable Principle.” Fellow Quakers appealed to Wetherill to reconsider his position but he believed he could serve both the Society and the cause of liberty. Some Quakers thought as Wetherill did and joined him in petitioning the Philadelphia Monthly Meeting for access to their buildings for worship. In a 1781 broadside, which is an 18th century poster, Wetherill claimed it was necessary to gather publicly to worship God and conduct “religious affairs.” He also boldly stated “we mean to use the burial ground” believing “the dead may lie peaceably together.” But the broadside fell on deaf ears.

Another factor that probably contributed to formalizing the new Society of Free Quakers stemmed from Wetherill’s 1781 role as an Overseer of the Poor in the city of Philadelphia. During the colonial period, religious, ethnic and professional organizations looked after their own and provided assistance in difficult times. Responsibility for those with no social attachments fell to the city and county, so Wetherill understood the added difficulty disownment carried for those with financial problems. Notes in the first Minute Book of the Religious Society of Free Quakers record Wetherill’s sympathy for those cut off from religious affiliation and support of the needy became part of the core mission of the new society.

It is important to reiterate that Wetherill and the others did not wish to be separated from their brethren. They considered themselves Friends despite their differences about the Peace Testimony, but the Testimony was a cornerstone of Quaker belief so dissention caused an impasse with no resolution that could satisfy both groups. Wetherill and his supporters met in one another’s houses and organized themselves into a Society in 1781. They decided to build their own Meeting House and purchased a lot in 1783. 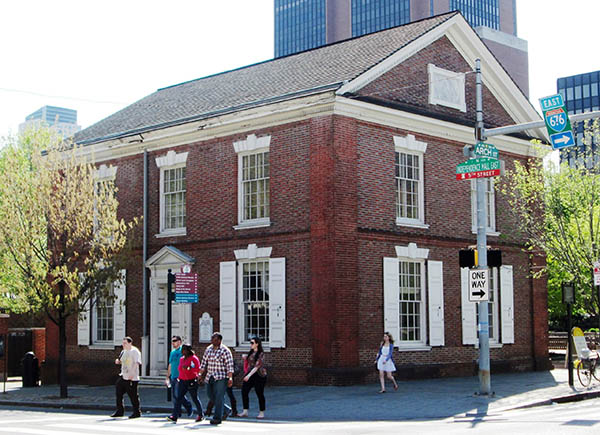 Construction began immediately and the first Meeting for Worship was held June 13, 1784. An estimated 200 people attended. Society Minutes note that it was “a solemn meeting” that included “divers of our fellow Christians of other denominations.” Curiosity satisfied, these diverse Christians returned to their own churches and meeting houses because a February 1785 list of members includes only twelve men and eleven women. Building and opening the Meeting House coincided with the end of the war, which meant the principal reason for disownment was no longer an issue. Some Free Quakers returned to their meetings, others joined the Episcopal, Methodist or Presbyterian churches, and some drifted away from organized religion altogether, but a stalwart group continued to meet for worship and business. Membership even grew and the small Society took its place alongside other established religious organizations. But by 1829, the remaining members devoted more energy to the charitable committee than to attending Meetings for Worship so the doors closed on that chapter of the Society’s history in 1836. After that, the entire building was rented and the income supported charitable outreach. In 1882, the Free Quakers resolved to hold a meeting at least once a year in November and that custom continues today as does support of non profit organizations.

Nearly two centuries after the Revolution, in October 1952, “The Society of Friends… rescinded their early action of reading out of meeting Samuel Wetherill et al, since the latters’ view of the propriety of fighting for their country has now been vindicated and approved.” A happy ending after all.