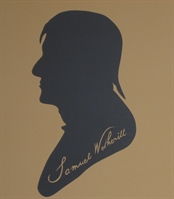 Samuel Wetherill came to Philadelphia from Burlington County, New Jersey at age 15 as an apprentice to Quaker carpenter Mordecai Yarnall. He became adept at his profession, serving as both a surveyor of buildings and director of The Philadelphia Contributionship, a fire insurance company. However, it was as a merchant and manufacturer that Wetherill made his mark. His factory produced fabrics made of wool, linen or cotton and he supplied a large quantity of woolen cloth to the Board of War during the Revolution, an activity that conflicted with the Peace Testimony of the Society of Friends of which he was an active member. In 1779, Wetherill was disowned for “disunity” because he “deviated from [the] ancient Testimony and peaceable principles by manifesting himself a party in the public commotions prevailing.” That same year, he assumed the role of Clerk for a small group of Quakers who were disowned for supporting the Revolutionary cause or for other reasons. They sought to continue to worship and meet as Friends in established meeting houses but were turned away. The group organized their own Society of Free Quakers in 1781. Wetherill served as Clerk, supervised the building of a meeting house at Fifth and Arch Streets, and traveled to other cities to visit similarly disenfranchised groups. He published religious tracts but continued to be actively involved in advancing American industry, moving beyond textiles into the manufacture of white lead pigment. He is considered the founder of the Religious Society of Free Quakers. 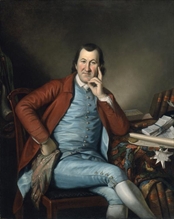 Timothy Matlack arrived in Philadelphia from Haddonfield, New Jersey around 1745 and listed his occupation as merchant. He was disowned by the Quakers in 1765 for “frequenting company in such manner as to neglect business whereby he contracted debts, failed and was unable to satisfy the claims of his creditors.” Despite this rejection, he considered himself a member of the Society of Friends. Matlack was an early supporter of the Revolution, worked as assistant to Charles Thomson, secretary of the Continental Congress, was a member of the Constitutional Convention for Pennsylvania, served as secretary of the Supreme Executive Council, and was elected colonel of a battalion in 1776. He saw action at Trenton and Princeton and when not in the field was occupied by the duties and responsibilities of his many government offices. He was among the small group that met at Samuel Wetherill’s house in 1781 to consider forming a Society of Free Quakers and is credited with the design for the storage vaults under the 1783 meeting house. These vaults were leased to merchants to provide a source of income for the religious society. Colonel Matlack is remembered as a patriot, soldier and original member of the Society of Free Quakers. He and his first wife, Ellen (d. 1791), are buried in the Free Quaker Burial Ground at Fatland Farm in Montgomery County. 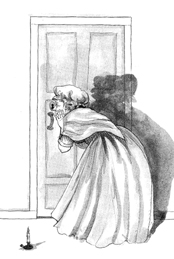 Lydia Darragh was a nurse and midwife who moved to Philadelphia after her marriage to William Darragh in 1753. She is remembered as a spy who supported the Revolutionary effort and thwarted the plans of British General William Howe in December 1777 by warning General Washington of a proposed attack at Whitemarsh. Her brother, Charles, a lieutenant on General Washington’s staff, was disowned by the Friends “for engaging in matters of a warlike nature” but only Charles and Lydia’s husband knew of her activities during the war. The Darraghs are listed among the original members of the Free Quakers. Philadelphia diarist Christopher Marshall noted in October 1783 that Lydia was dismissed by the Society of Friends for attending “the meetings of the disowned friends” and that her earlier “crimes” were not mentioned. 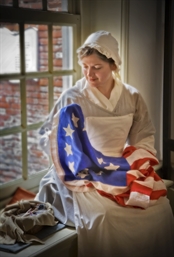 Betsy Ross was widely known for her skill as a seamstress. She and her first husband, John Ross, operated an upholstery shop on Arch Street in Philadelphia. She was raised a Quaker but married “out of meeting.” Betsy and her third husband, John Claypoole, joined the Free Quakers in 1785. She is described as an industrious woman who, with the assistance of her daughters, granddaughters and nieces maintained the family flag making and upholstery business. Philadelphia historian Margaret Tinkcom traced Betsy’s fame as maker of the Stars and Stripes to a paper read by her grandson William J. Canby at the Historical Society of Pennsylvania in 1870 recounting her 1776 meeting with General George Washington, Colonel George Ross, an uncle by marriage, and Robert Morris. “Whether or not she made the first flag, Betsy certainly did make pennants and ensigns for the State Navy Board…” A more recent, 2002, account of Ross and the flag by another of her descendants, John B. Harker, makes the same claim: “today we are reasonably convinced that Betsy’s flag was a naval flag, with a simple ‘in line’ arrangement of the stars…” Photo courtesy of the Betsy Ross House.